We (and everyone who was a third year in 2020) were dealt a very bad hand for this FMP. There was a university staff strike in February. There was a pandemic that closed computer labs and made one of us leave the country in March. Our computers never matched the equipment we had access to at uni and, as everyone else, we were dealing with a lot. Having a 2 week extension helped, but the challenges were many. Because of all of this, I feel really proud of what we have accomplished. We can certainly see there are things that could be better, but we managed to carry on with a group project from a distance and get it to a pretty decent standard.

Obs: Sophie speaks in detail about her parts of the project on her blog.

What could have been better

I did not get the opportunity to make all the textures I would have liked to, and ended up re using a lot of them just using the shader options to change them. Since nothing was really close to the player, I felt like there wasn't much of a point finalising some props to a high standard, and filling up a scene this big can be extremely time consuming. I also did not have the time to make all the props I had set off to do. I wish I had had the time to make interiors for the parallax on the windows, which stayed as simple cubes at the end. I think the scene looks a little too clean, and needed more rubbish and grime that I tried making last minute but simply did not look good enough so I abandoned them.

It would have been nice to have made the playable area bigger, but we did not have the time to populate it well enough to allow people to get close to certain areas. I wish I could have had the time to create more narrative pieces. The newspaper and flyers you can pick up from the floor are the only pieces of narrative in the scene, other than the things that gave it a time and space (the diesel punk, 1940's and 1950's aspects, the architecture styles, etc). I would have liked to add more narrative, like having a table with things that were left behind after a date, or a meeting between spies, a phone booth where you could hear a phone message, the entrance to a private investigator's office, etc. Unfortunately there really wasn't that much time with how big our scene was. 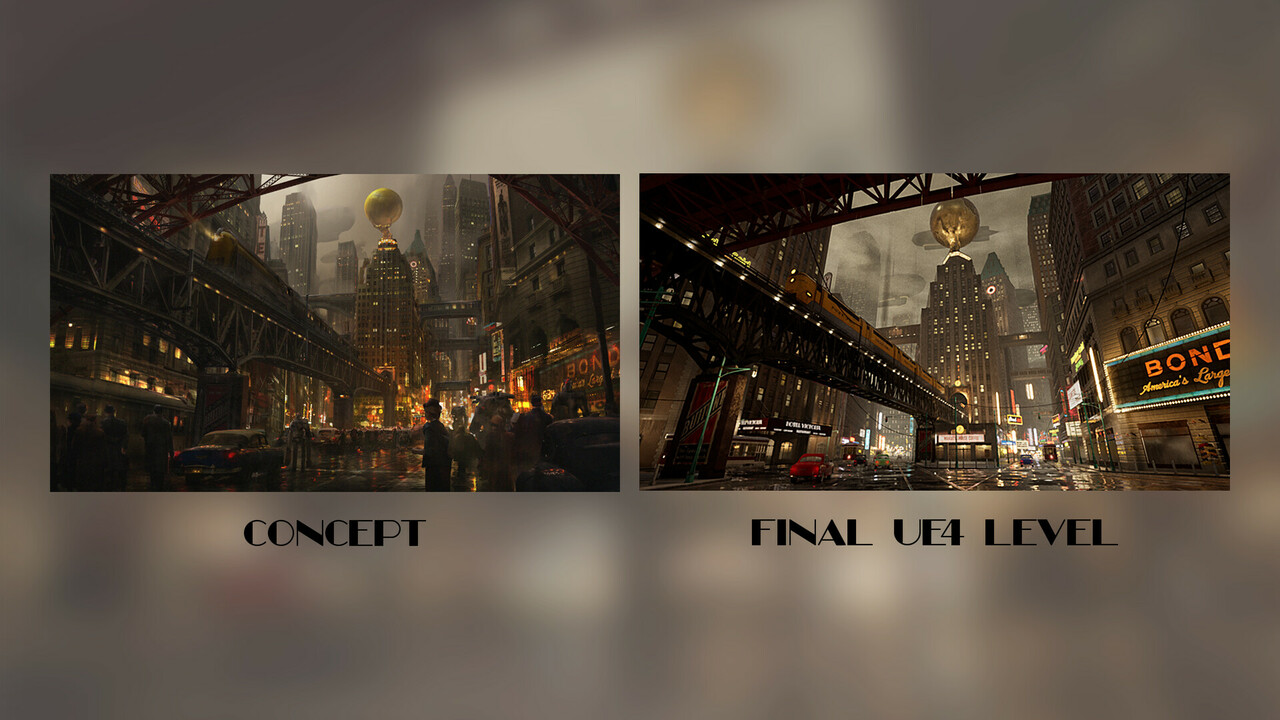 Following a concept that only has one key shot is never easy. We had to create so many things we couldn't see, based on the language from that shot. I think we did a good job at recreating the mood of the concept, and I think the props I created without concepts fit the environment and helped creating the world. We were also able to add some stretch goal things, like vehicles. I modelled low poly, high poly, baked and textured this car in 2 and a half days, and spent a day and a half on the tram. Of course they could look better, but I simply did not have the time to model and texture them, and chose to do so to make the scene look a bit more crowded.

Our team effort was one of my favourite parts in this project. We were able to communicate daily and effectively, and constantly made things to help each other. With the building generator that Sophie developed, I helped by making the modular kit. That required a lot of communication and back and forth between us. With the tram tracks, Sophie made the blueprint for it, and I made the model. Even a simple thing like that requires we are clear on what we need from each other. I had to communicate what I needed the shaders to do, or if I was going to change something in them, so there was no confusion. So I think we were a very effective team.

You can get much better results as a team than on your own. Thanks Sophie for putting up with me and for your patience, it's been a great ride!

Thanks to everyone who gave us feedback, tutors, colleagues, friends, and industry people, you certainly made our project much better.