This is the last post about my FMP and it talks about the last few weeks of it.

I wanted to add some period magazines and comic books to the newsstand, to add some interest to the ground part of the level and do a bit of story telling. I used original magazines from the 1950s (and oh my god, how hard it was to find covers without racist/sexist stuff on them). I edited them on Substance Painter to add some detailing, and a lot of them needed editing in Photoshop to take away excessive wear and tear (they're new in the scene). 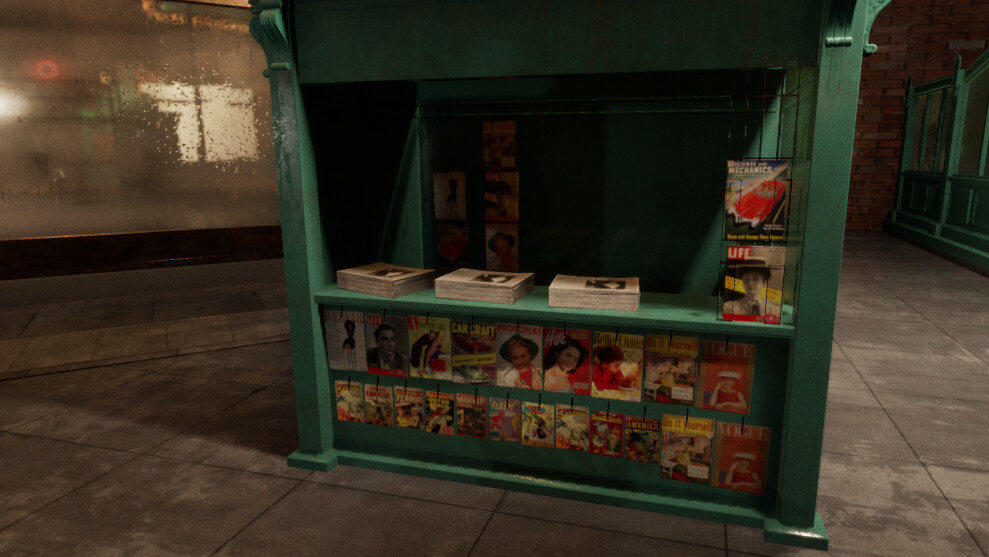 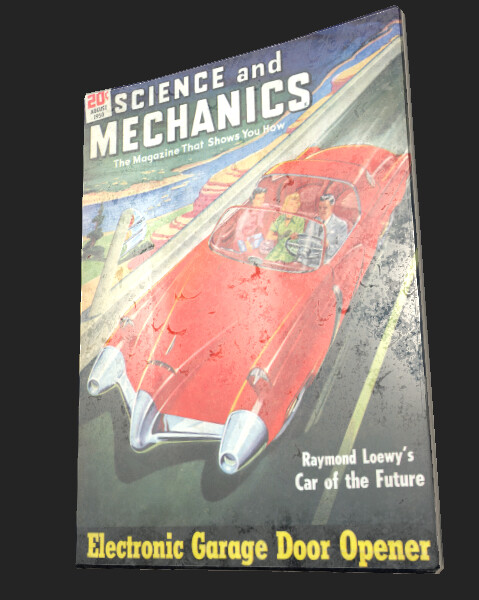 The newspaper cover used was this one.

I also wanted to scatter newspapers on the ground, to create some city dirt but also to serve as an object you can pick up and read about the explosion of the Hindenburg (again, to add some storytelling to the scene. On one side, you have zeppelins on the sky and newspapers telling about the explosion of one, on the other you have music concerts and flyers). The image for the advertising was taken from here. Sophie made the pick up blueprint. 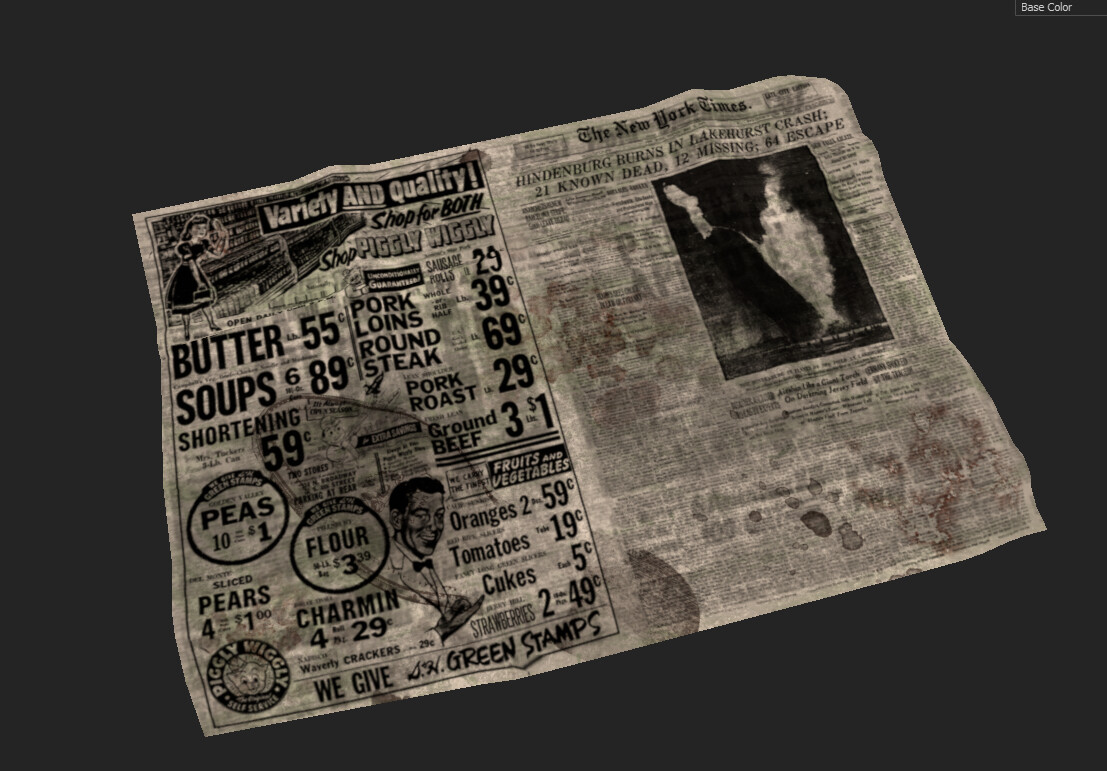 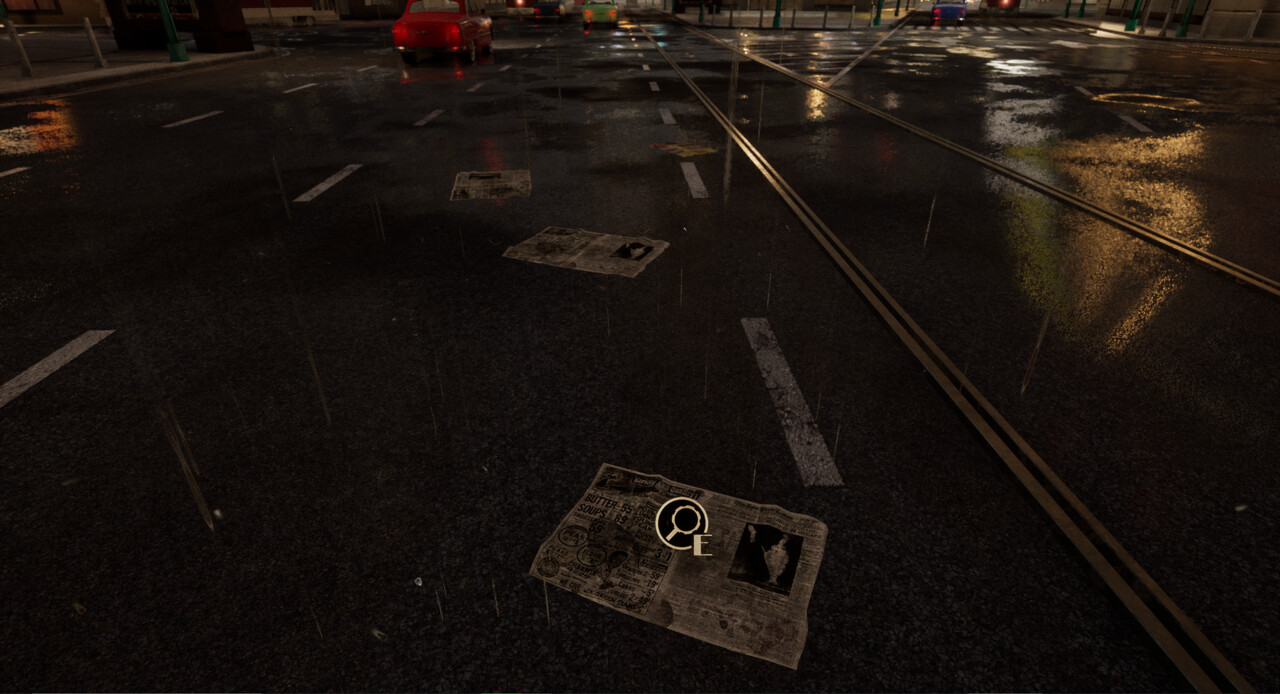 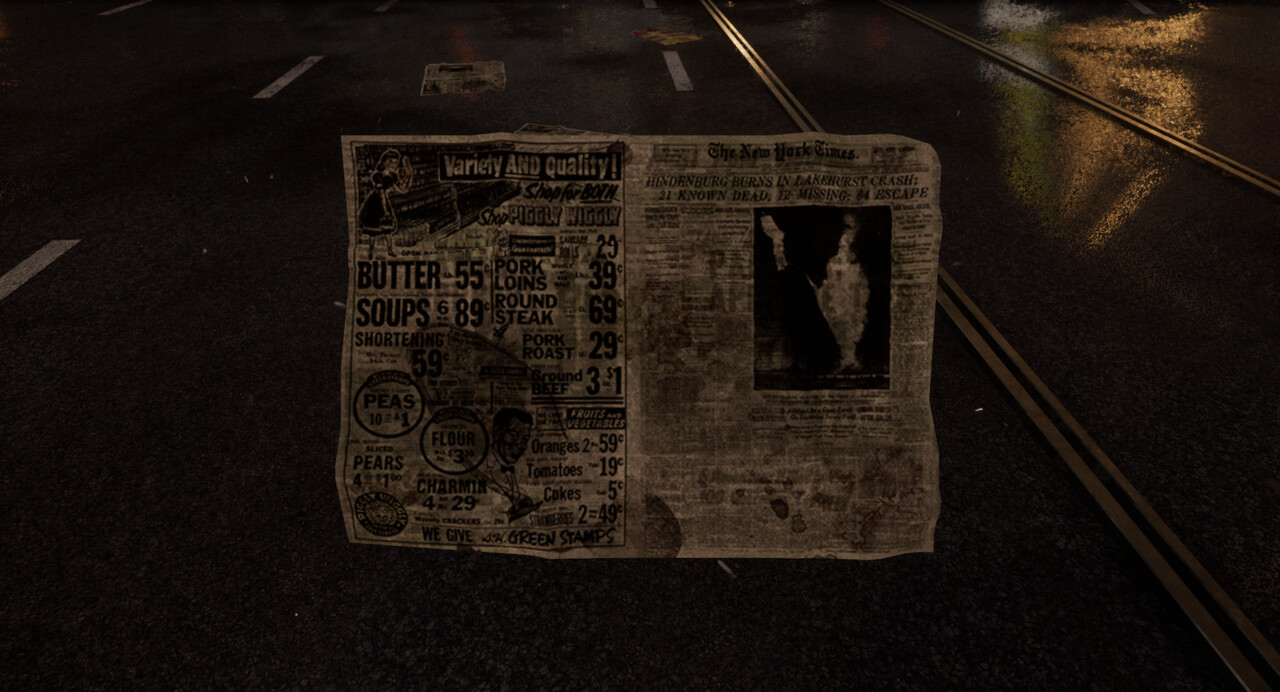 To make the newspaper look wet, I added a couple of layers of different newspapers pages on top of the main layer, made them a multiply layer, and blurred them.

Using dynamic lighting meant we could not bake the emissive materials as lighting. This was a huge problem, because the scene is full of emissive materials, neon signs, store signs, lamps on the bridge, etc. To get around it, I made two shaders, one being a simple additive material, and the other being an additive billboard material (following this tutorial for the billboard).

The billboard material was used in the distance, and they were made out of images of neon signs I found online and then heavily edited so they were mainly black where they were not emissive. 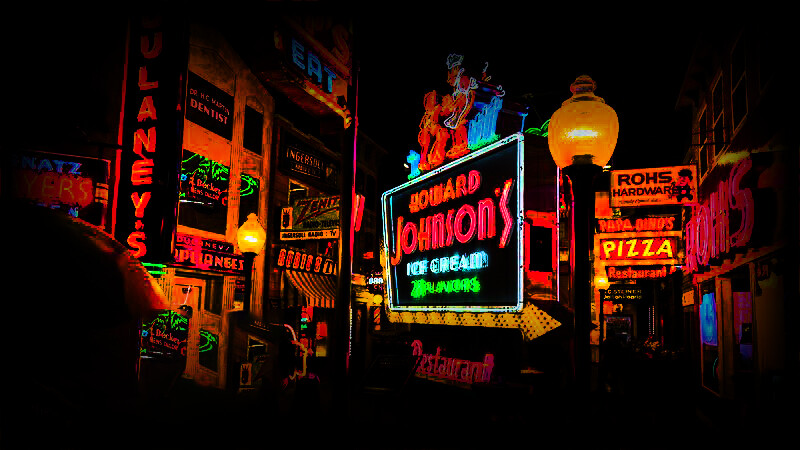 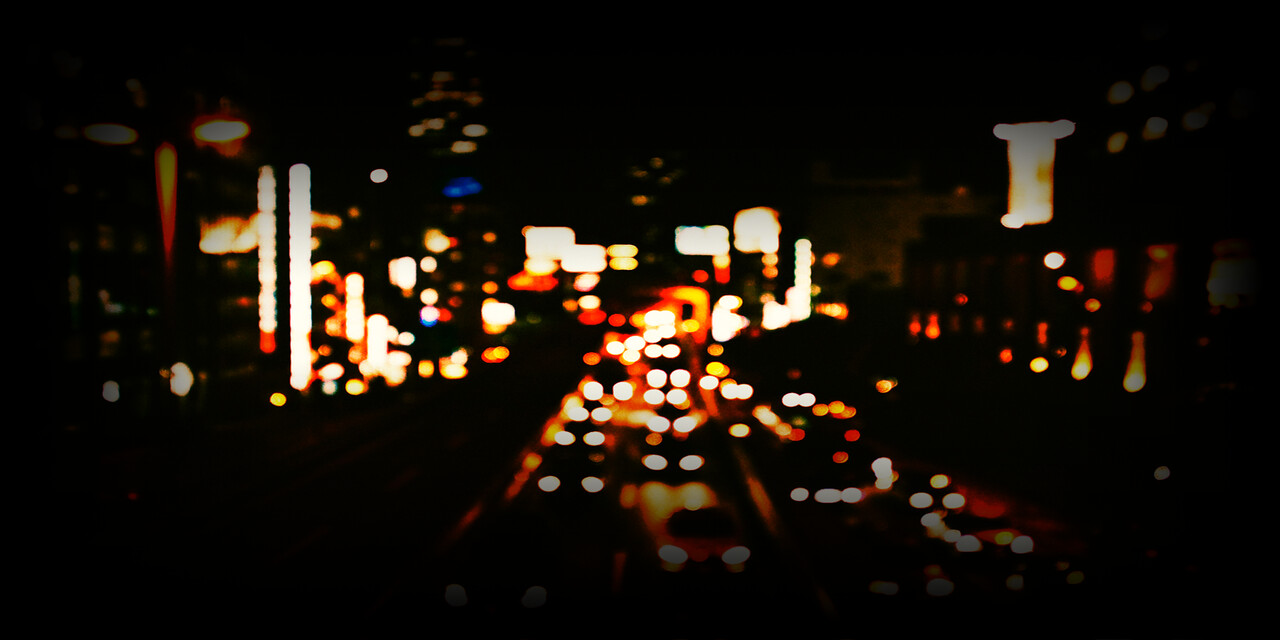 Having these emissive billboard cards in the distance hugely helped with having enough noise and lights (that were actually not lights :) ). It allowed me to delete a lot of actual lights I had been using. 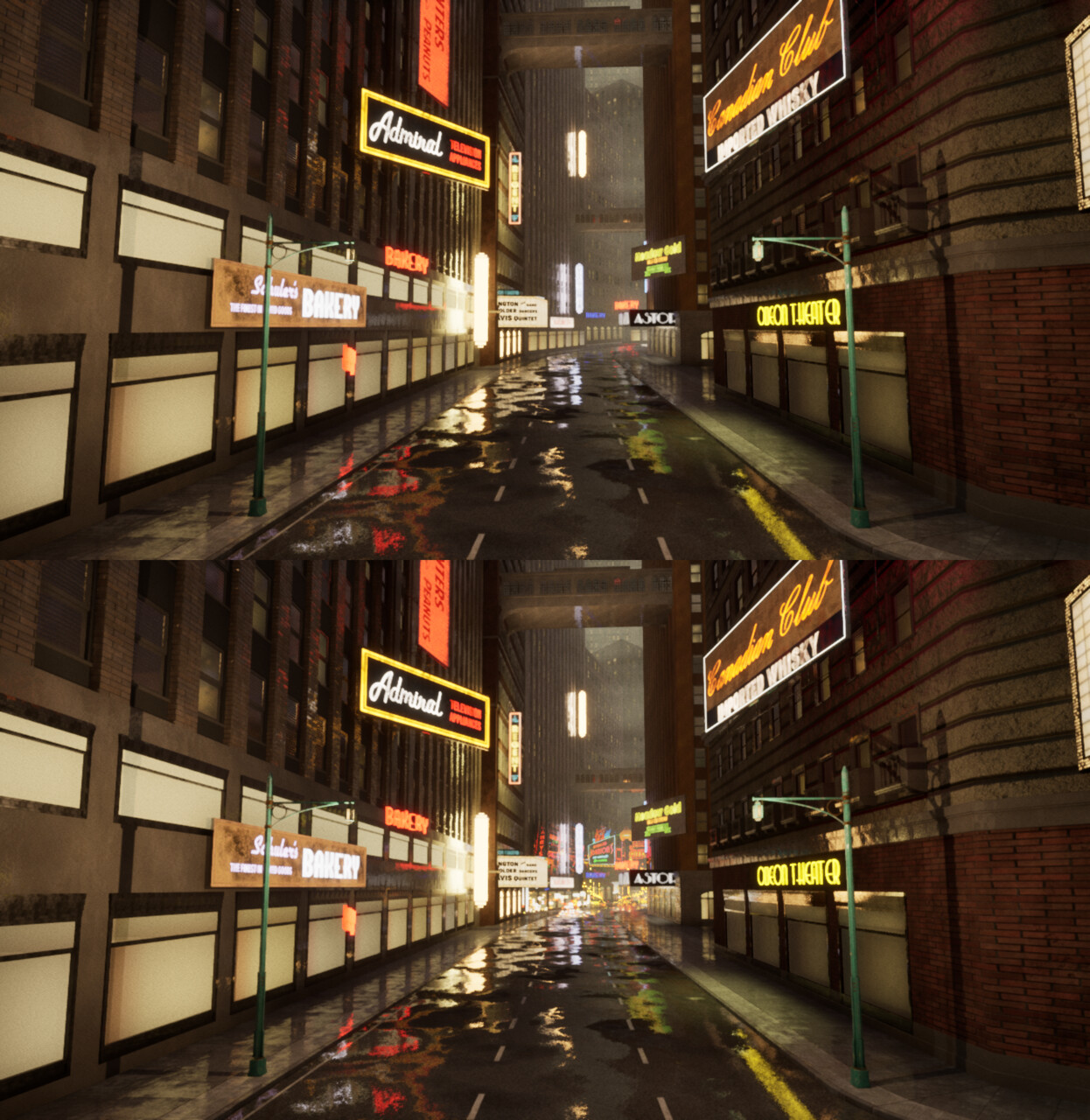 One thing that was really sticking out for me was the lights on the bridge, which didn't look connected with the environment. For that, I made a copy of the bridge and took it away from the scene. I then added point lights on all light bulbs locations, then deleted the light bulbs. Then I rendered that: 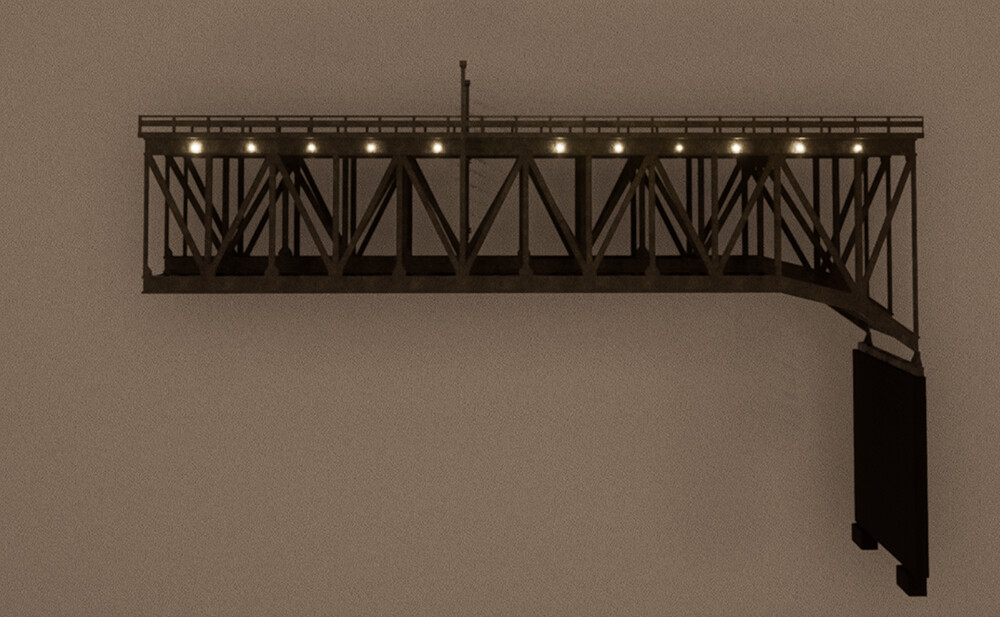 Fom that I made a 1024x32 texture from the lit strip, and applied that to the bridge as the simple additive material: 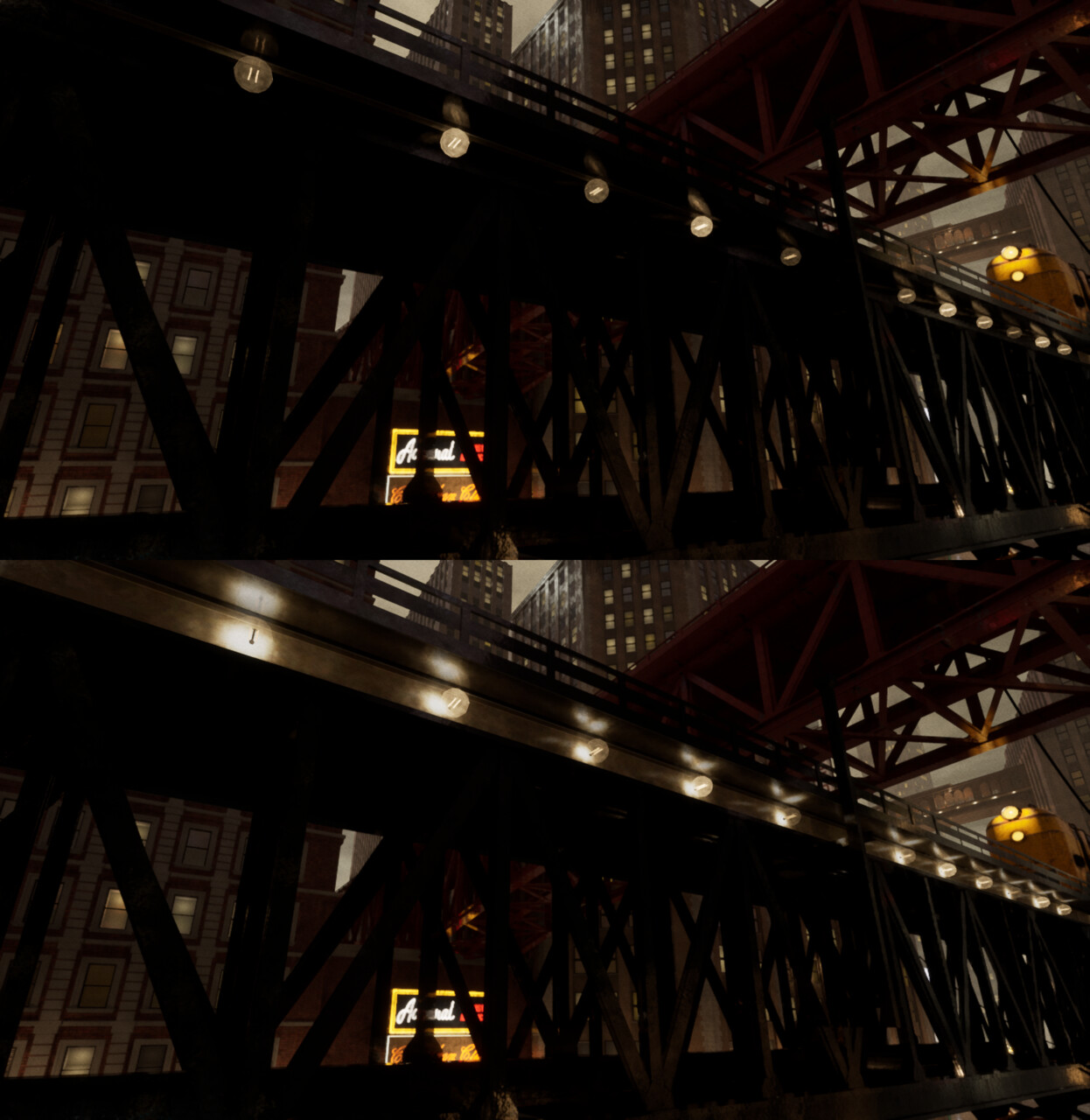 We had another feedback session with our tutors Teo Kuzmanova and Mitch Small, and they said the scene really needed some vehicles. We had not planned to make vehicles as they take a long time to be made right, and none of us are vehicle artists, but we finally decided to make some. Sophie made the train, and I made a car and a tram trying to not obsess too much about them not being perfect. I made a highpoly and baked the car, and also textured it, but decided to make the tram midpoly and used tiling textures to save time. The car was modelled after a Ford 1949 Coupe. 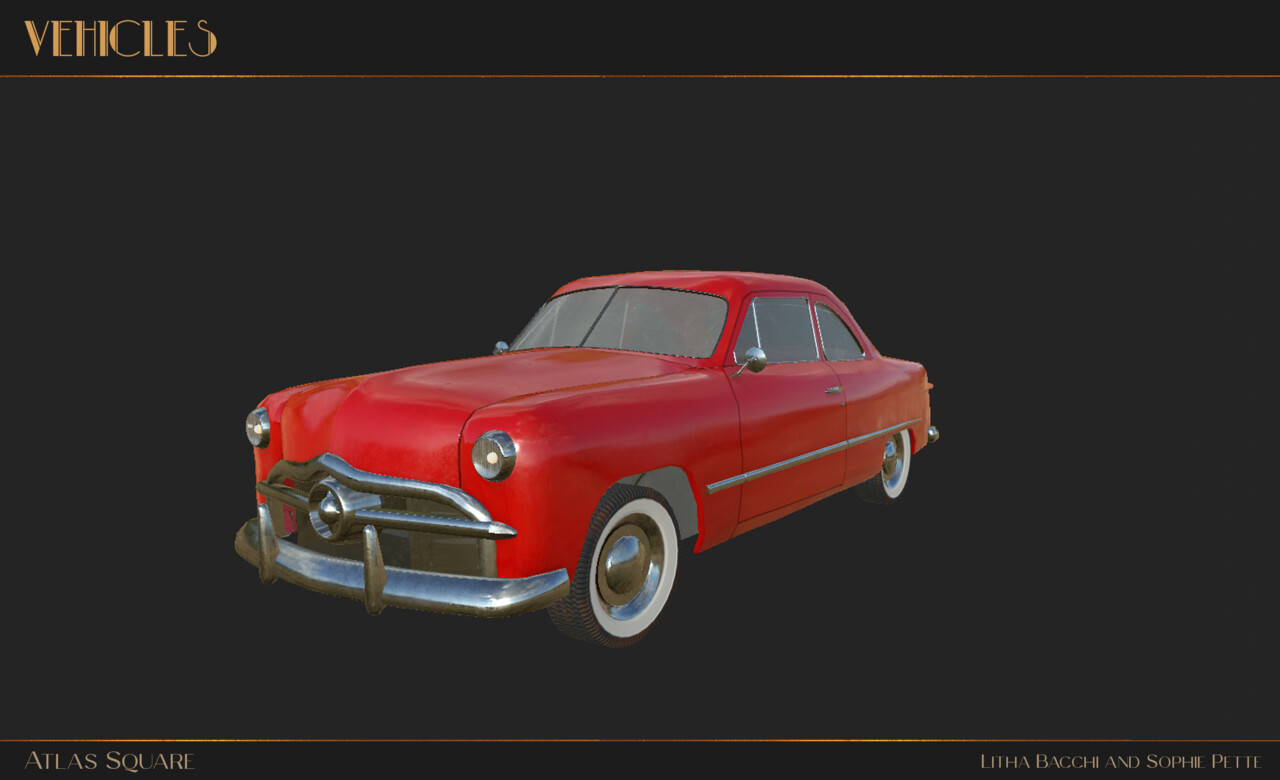 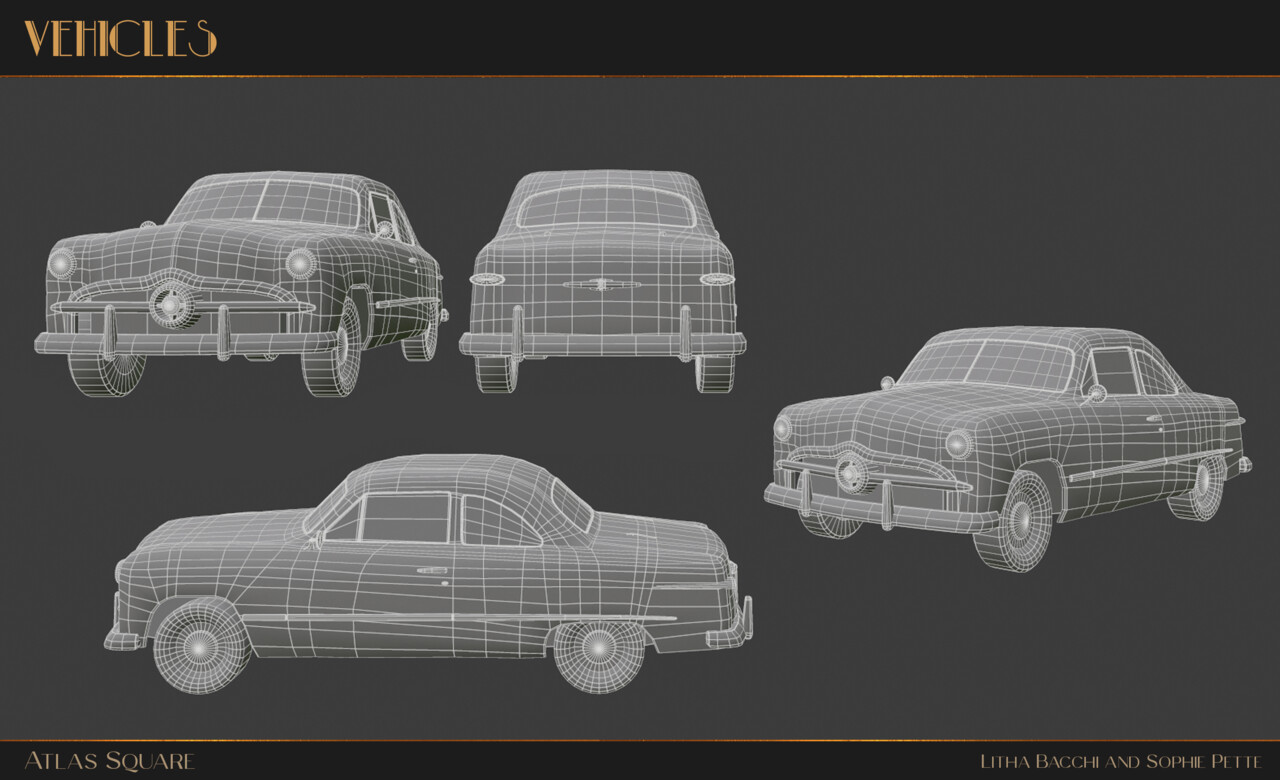 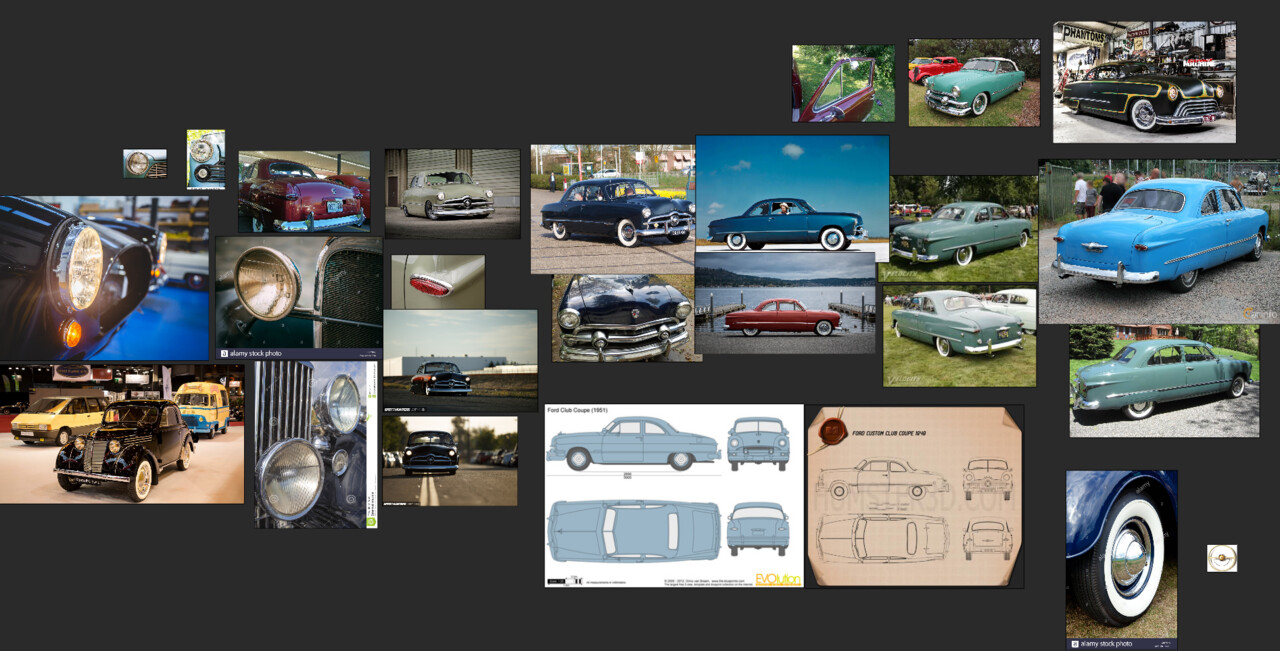 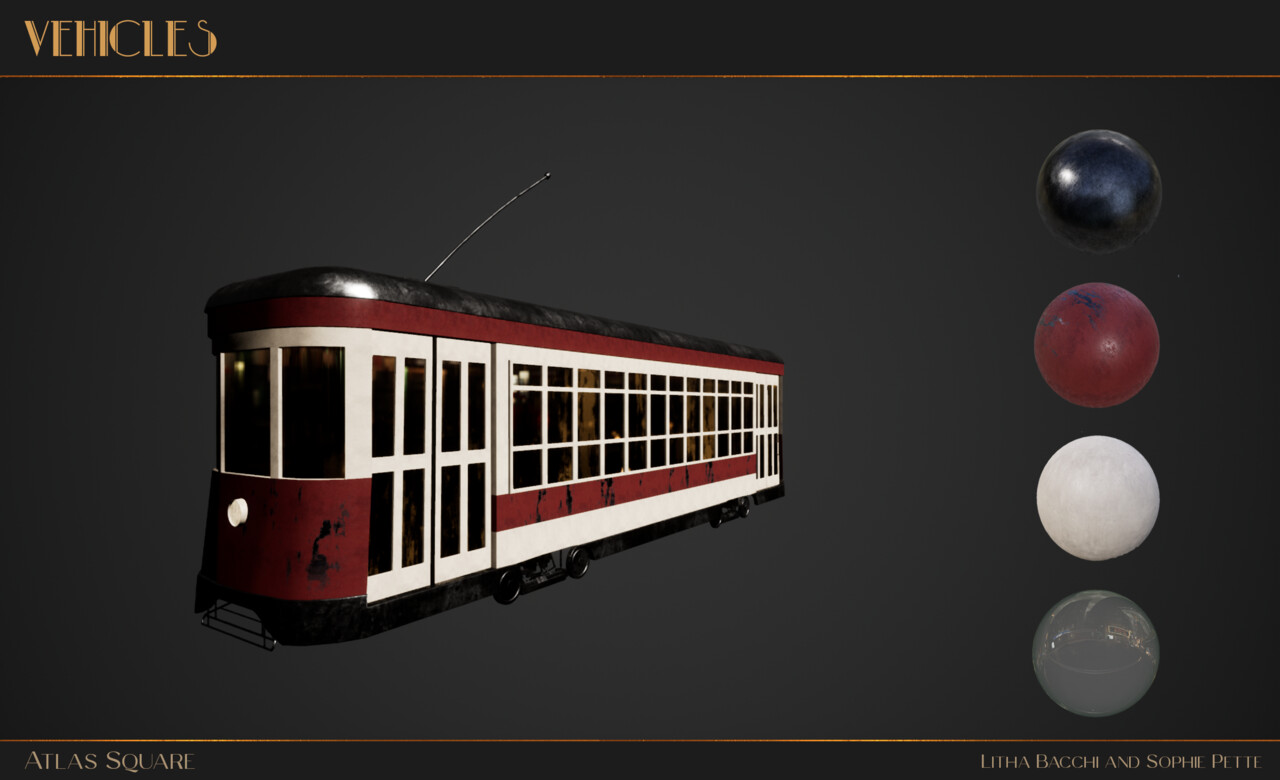 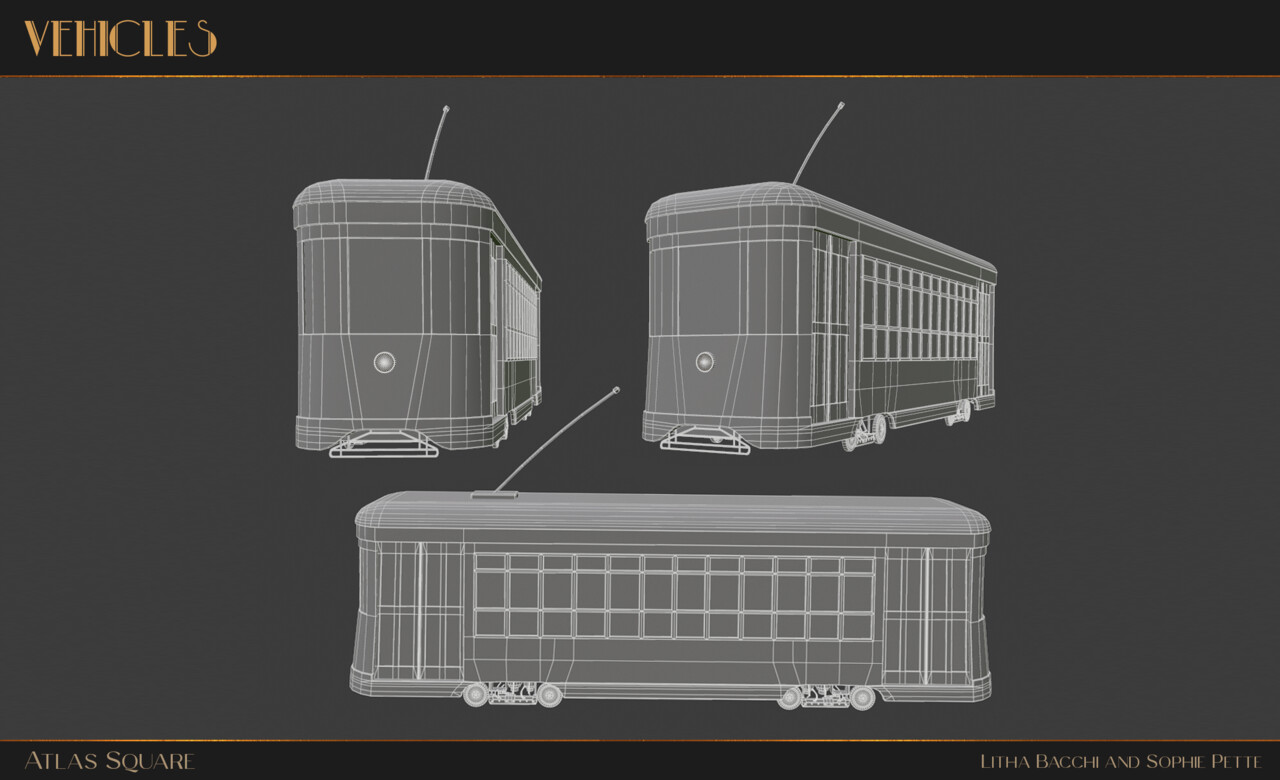 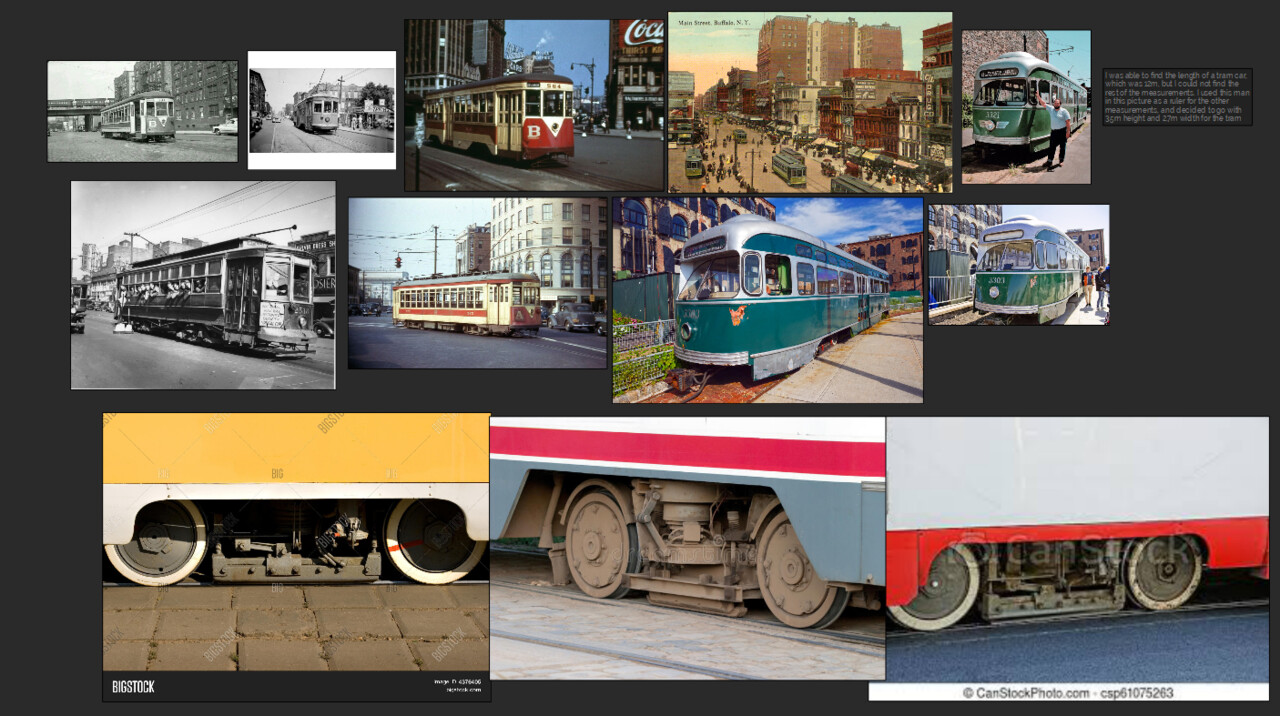 We decided to make some cable mesh splines to make the city look a bit more believable and to add some muted city noise to the scene. It also made the electric trams in the scene make sense and added some diagonals to the composition. We also made tracks for the trams using splines (Sophie made the spline blueprint and I modelled the tracks and positioned both tracks and cables). 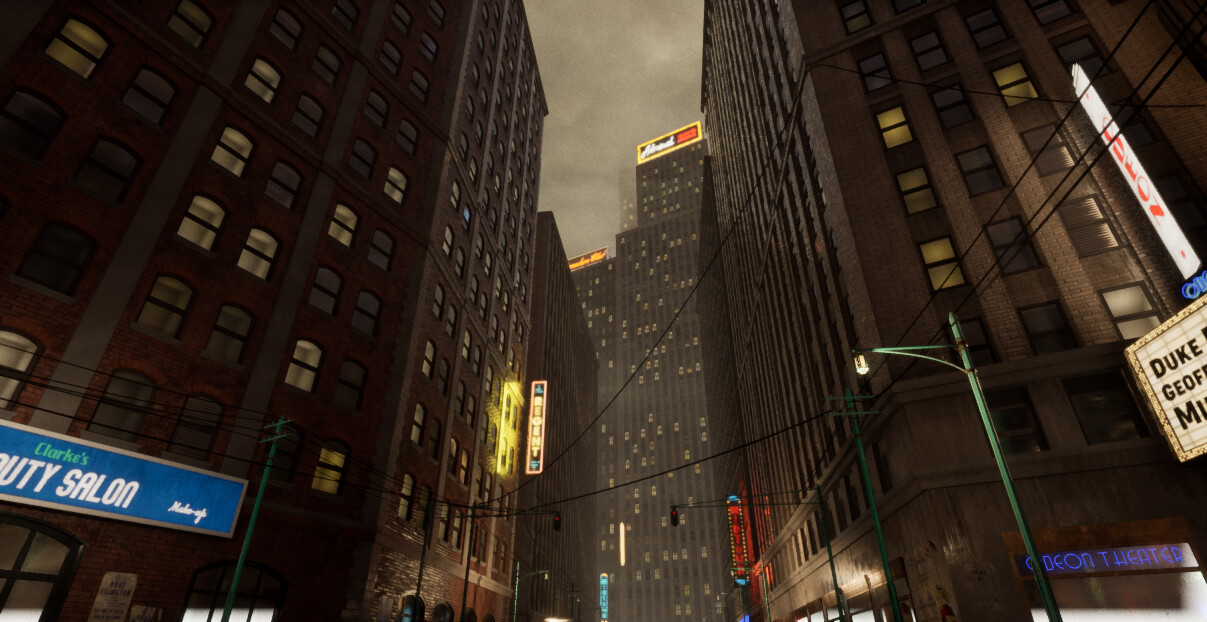 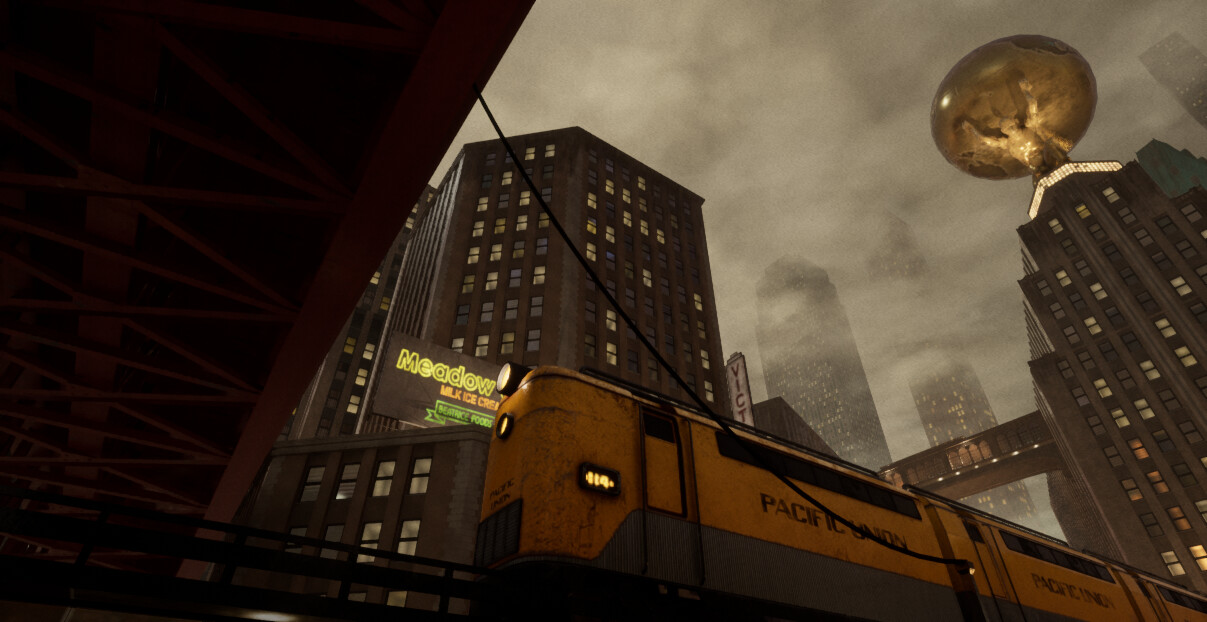 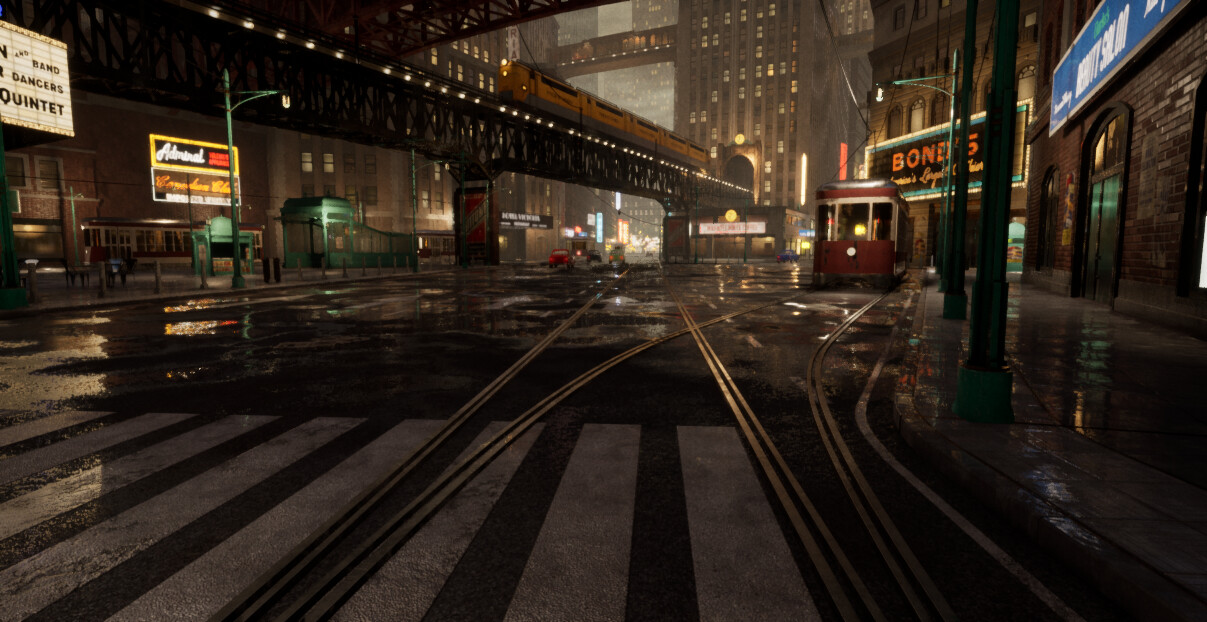 Next we spent some time preparing LODs for the scene, but when set up for the buildings, it made the FPS drop (still unsure why!). So we deleted the LODs from the modular kit and kept them for other things like the cars and trams.

We also spent some time here optimising anything that needed to be optimised, checking which textures could be smaller or deleted, deleting old assets, deleting lights that didn't seem to be doing much, etc. The lowest my FPS got to was 50 FPS, but in most parts of the scene it is well higher than that (I wonder what it could have been if we were able to use baked lighting).

Next I made and applied some decals. Here are some of them (manhole cover is shiny because of the rain): 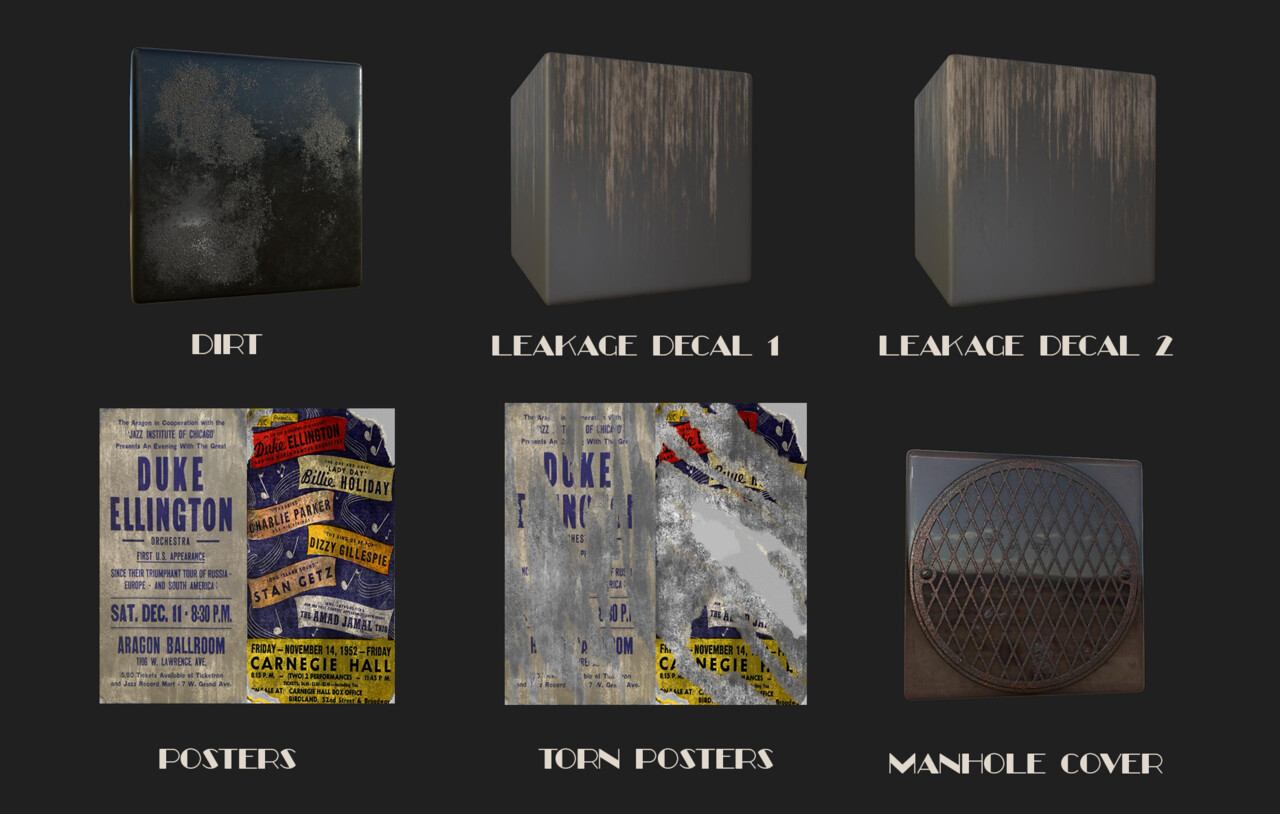 As well as normal decals, I used mesh decals to add dirt between meshes that intersected so they didn't look so "gamey". 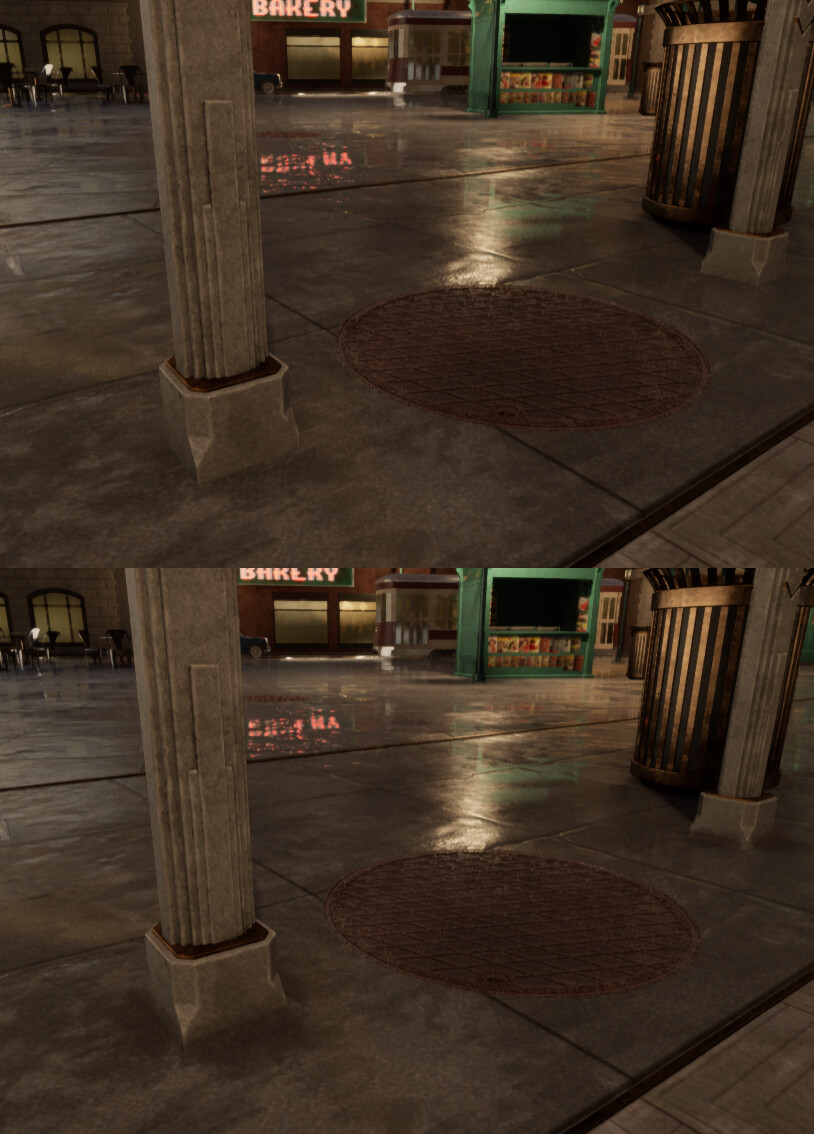 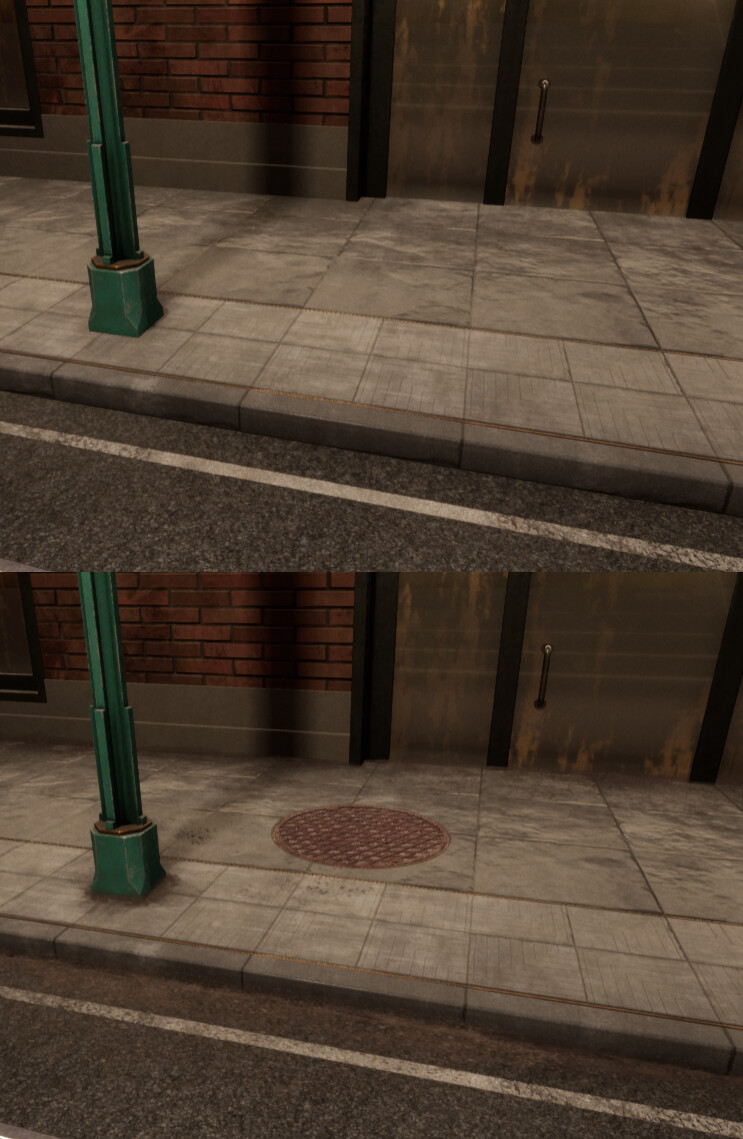 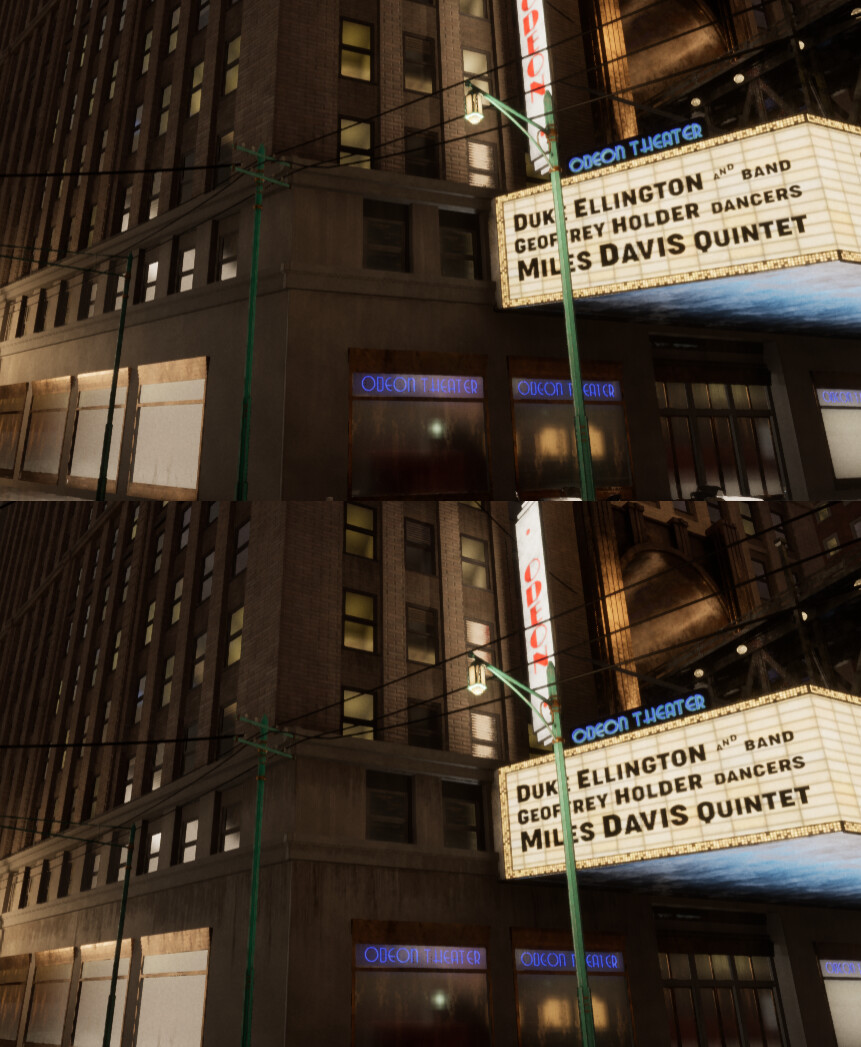 The posters allowed me to add narrative, and also dream about concerts I wish I could have been to. The posters were taken from here and here. 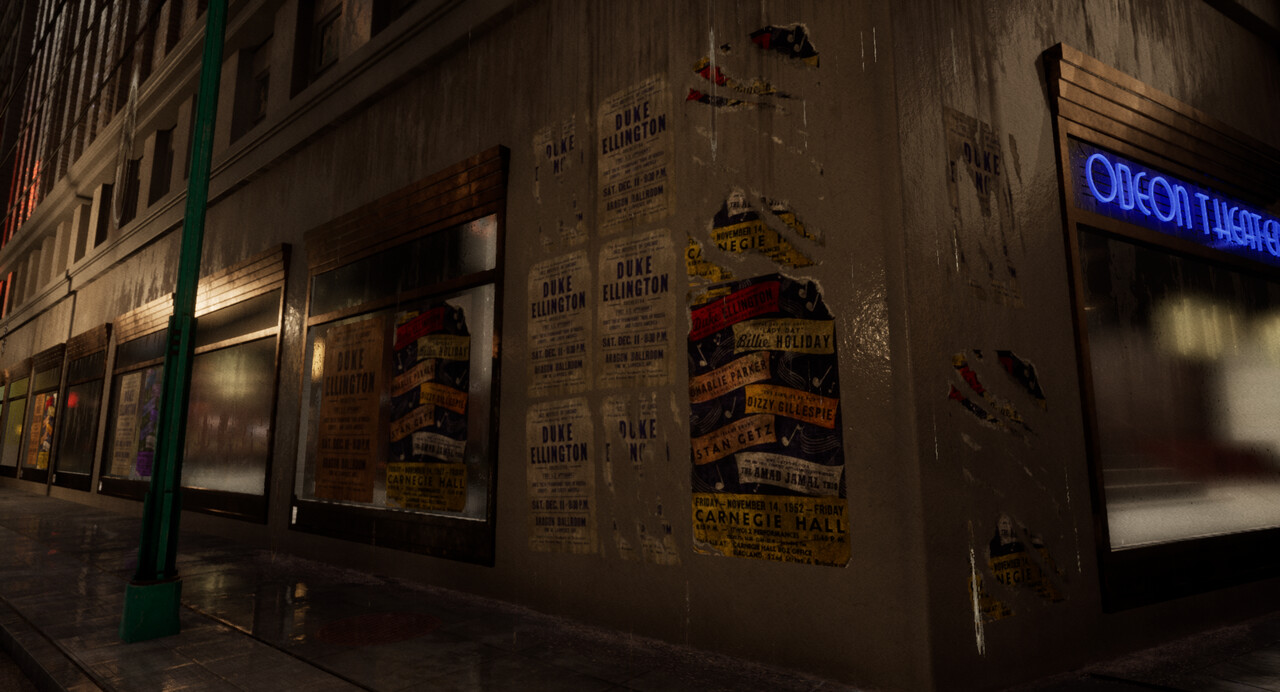 I also added player collision boxes to keep the player in our main area. The biggest goal of this project was recreating the concept we were following, so we did not want people to venture too far from it.

Another thing we decided to add were the zeppelins from the original concept. I modelled them quite quickly and did not detail them much since they would be so far away. They were textured entirely with tiling textures too, to save time (and textures). Between the distance and the fog, you really can't tell. 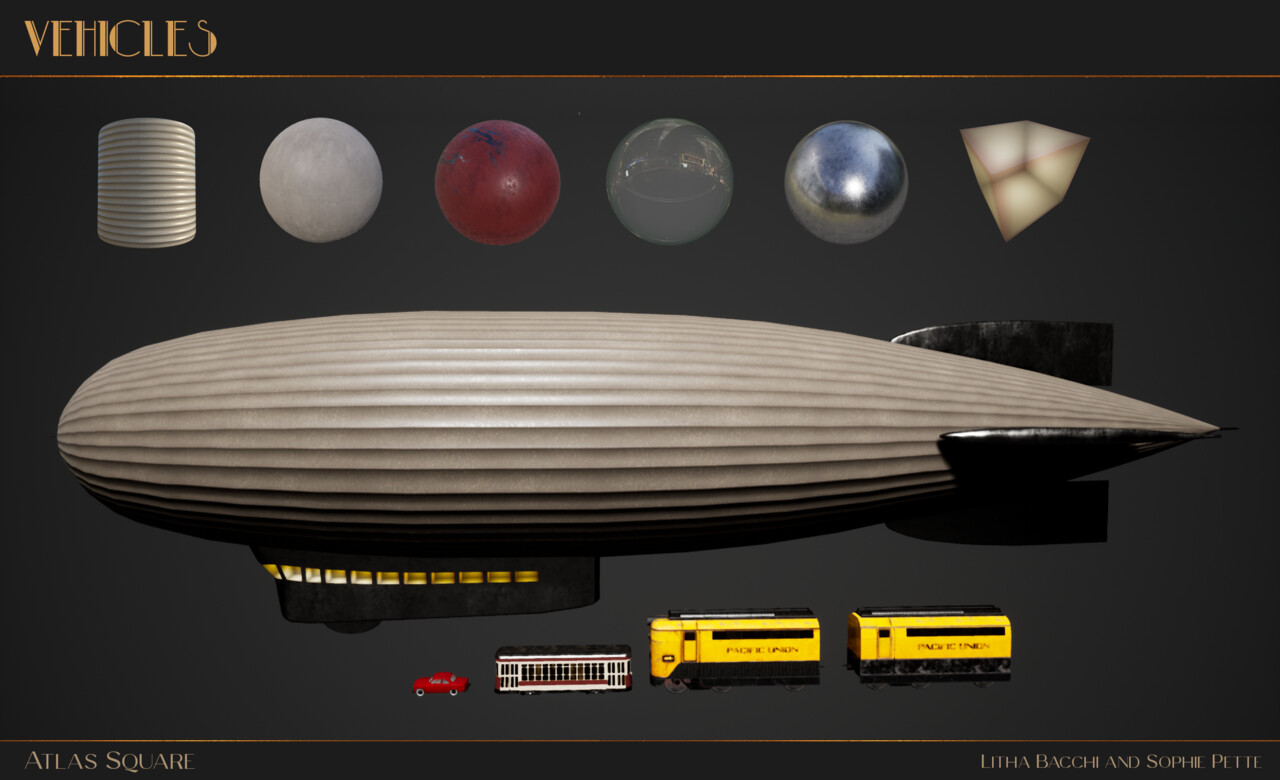 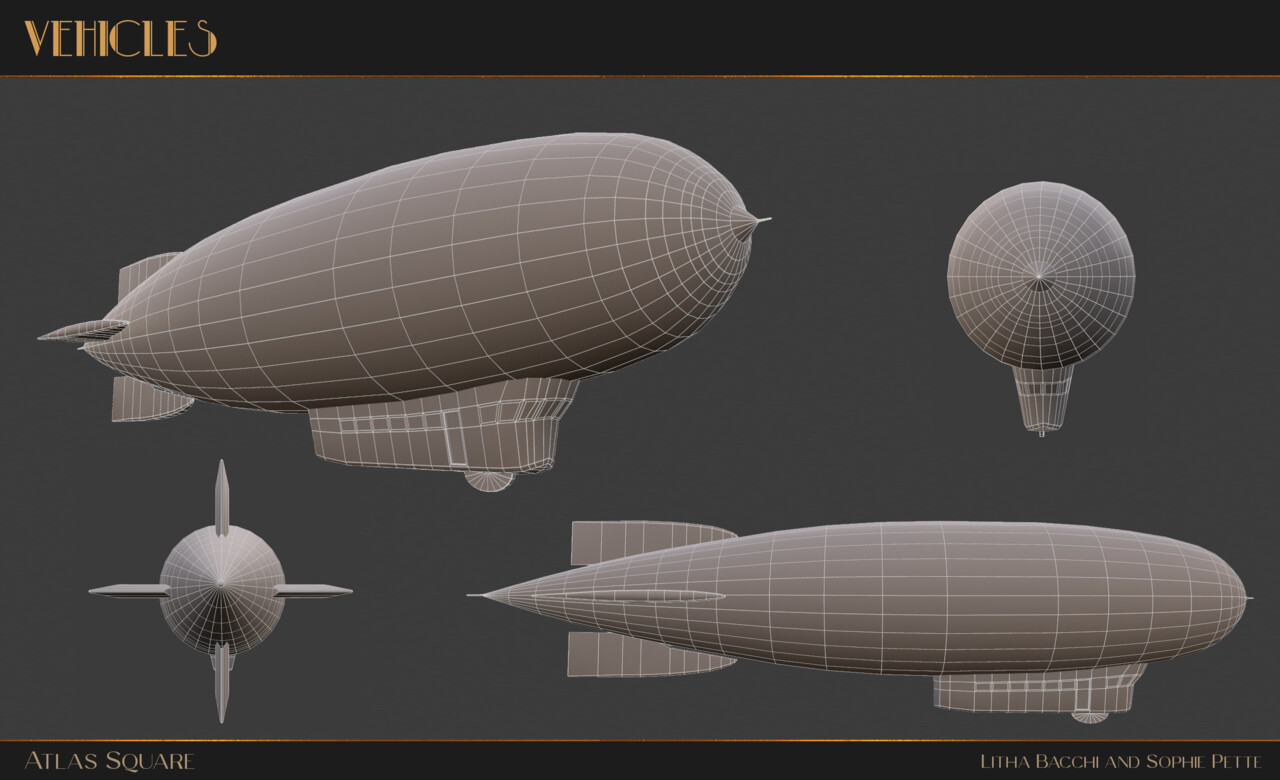 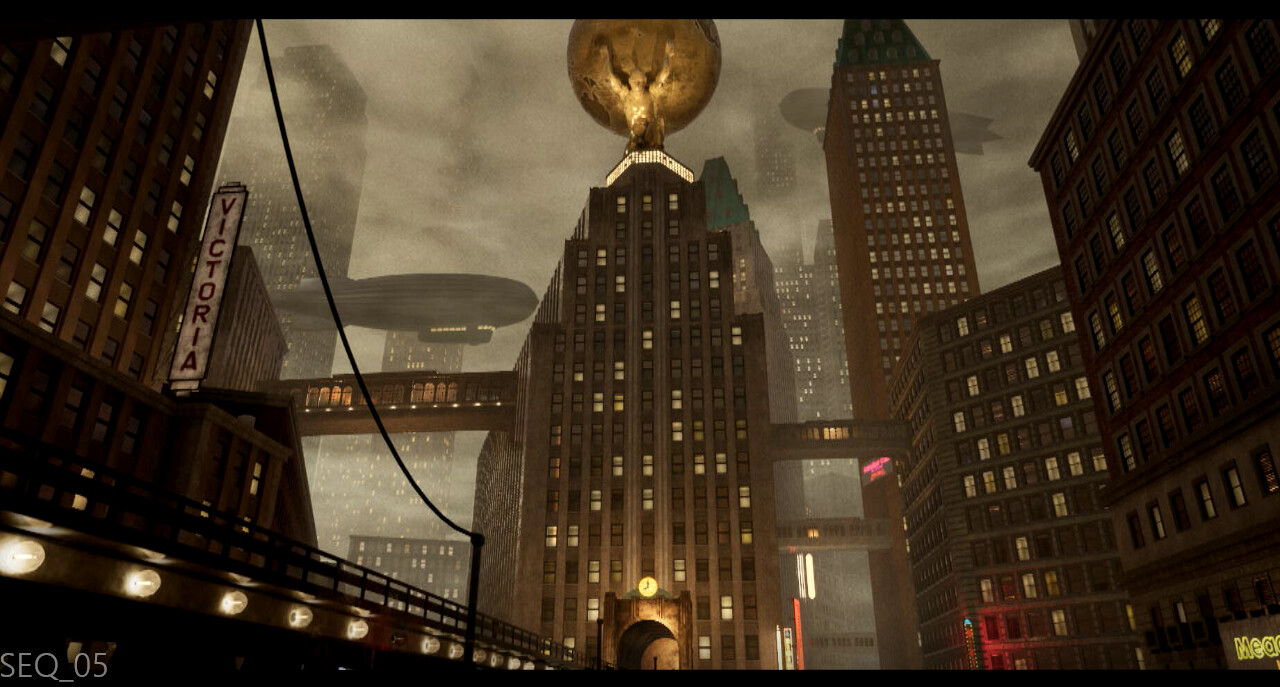 In time: the HDRs we used for the scene were taken from HDRI Haven and No Emotions HDRs.

The last thing left for us to do was a video flythrough and a gameplay video of the scene. I reused this tutorial to remember how to render sequences in UE4. I captured the sequences and Sophie edited the videos. We used music from this website.

This was our final screenshot: 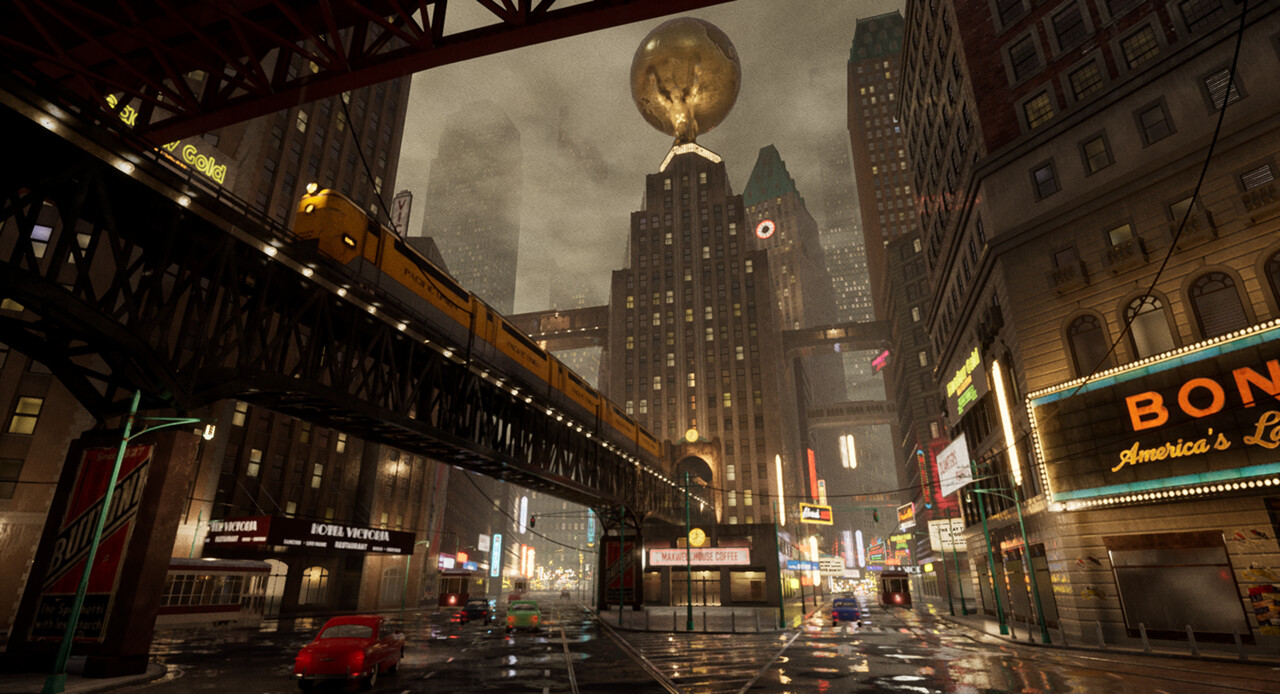